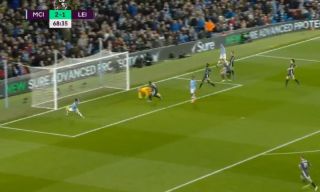 Gabriel Jesus has tapped in at the far post to make it 3-1 to Manchester City against Leicester City in this evening’s Premier League clash at the Etihad Stadium.

Watch the goal video below as Jesus is able to apply the simple finish after great play by Belgian maestro Kevin De Bruyne.

Gabriel Jesus pokes in Kevin De Bruyne's cross from the right to give Man City a two-goal cushion ???

De Bruyne does brilliantly to dance his way into the penalty area before then getting a perfect cross into the box for Jesus to tap home.

City went behind to Jamie Vardy’s goal earlier in the game but have come from behind and now look on course for an important three points.