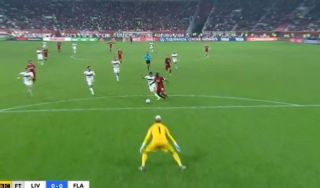 Liverpool have been the victims of some truly awful refereeing tonight in the Club World Cup final.

Watch below as the Reds thought they’d been given a penalty in stoppage time after Sadio Mane was hacked down.

In fairness, the Senegal international did appear to be fouled outside the box, so a penalty would’ve been harsh on Flamengo.

Absolutely disgraceful how this isn’t even awarded as a free kick let alone a blatant red card. pic.twitter.com/YHDhN4XL9t

However, the referee ended up looking at VAR and deciding to just reverse the whole decision altogether.

Surely a free-kick and possibly a red card for the last man who brought Mane down would have been the obvious call here?

Liverpool can quite justifiably feel furious at this disasterclass from the ref tonight.