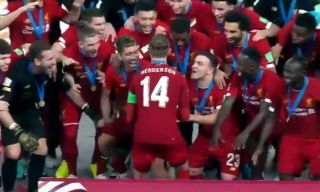 The England international has got his hands on three in 2019 – the Champions League, the Super Cup, and now the Club World Cup after Saturday night’s 1-0 win over Flamengo in Doha.

Champions of the World ?? pic.twitter.com/jLM4mbDJX2

Pictures courtesy of the BBC

Each time he’s led the trophy celebrations with his team-mates, Henderson has done a little ‘shuffle’ before raising the cup, and it’s fair to say it’s going down well among LFC fans on Twitter.

You can't watch this without grinning like a psychopath. This Henderson shuffle is something I can get very used to. https://t.co/YGtat3cZN7

HENDERSON DID THE ICONIC TROPHY SHUFFLE. TEARS IN MY EYES.

Jordan Brian Henderson with his little shuffle before the trophy lift, you love to see it

World Champions baby! Well done to the team. A special shout out for the unsung hero that is Jordan Henderson and his trophy lift shuffle #LFC #ClubWC pic.twitter.com/e8N0qEIHMh