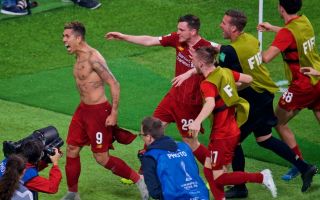 Liverpool have become the first ever English club to win the treble of Champions League, Super Cup and Club World Cup.

The Reds beat Flamengo 1-0 tonight thanks to an extra time goal from Roberto Firmino, making it three trophies for the calendar year of 2019.

It’s been a great few months for Jurgen Klopp’s side, who will surely add to their trophy haul in 2020 as they sit ten points clear at the top of the Premier League with a game in hand.

For now, however, they can also relish this small piece of history as they achieve something the likes of Manchester United and Chelsea have previously failed at.

Despite these clubs also winning the Champions League in recent times and getting the chance to contest these trophies, neither have actually picked up all three.

No other English team has done the international treble.

United lost the Super Cup final back in 2008, while Chelsea were beaten by both Atletico Madrid in the Super Cup and by Corinthians in the Club World Cup in 2012.

Liverpool have done brilliantly to get their hands on every trophy they’ve been in contention for following their European Cup success, even if the Super Cup and Club World Cup are not considered by everyone to be the biggest of trophies.

LFC fans won’t care as they get their hands on yet more silverware, adding to their hugely impressive collection…

Liverpool have done it!