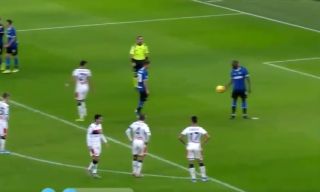 Romelu Lukaku has shown his class with a gesture towards Inter Milan youngster Sebastiano Esposito tonight.

Watch below as the 17-year-old, making his full debut for Antonio Conte’s side, steps up and puts away a penalty kick against Genoa.

Lukaku could've had a hatrick but allowed 18-yr old Esposito to take the penalty for Inter on his debut ? pic.twitter.com/EDzQ5kXRe9

Lukaku, however, was originally intended to take the spot kick, but allowed Esposito to have it and mark his full debut with a goal.

The Belgian had a fine game and scored an absolute belter at the San Siro, but it’s little moments like this that so often really make football the beautiful game.