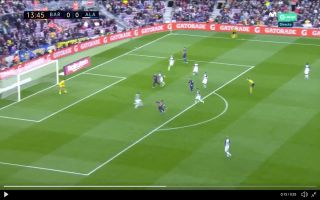 In the 13th minute of this afternoon’s La Liga encounter between Barcelona and Deportivo Alaves, Arturo Vidal played a lovely through ball into Luis Suarez’s path.

The Uruguayan talisman latched onto the ball before slotting a low cross into the box, after the ball slipped through a defender’s legs it ran towards Griezmann.

The World Cup winner showed his brilliant finishing ability as he tucked the ball into the back of the net with his weaker right-foot.

Take a look at the Frenchman’s opener below:

It seems as though Griezmann is beginning to settle at the Camp Nou, this will be a massive boost to the side as they look to battle Real Madrid for the La Liga title and make up for last season’s woes in the Champions League.