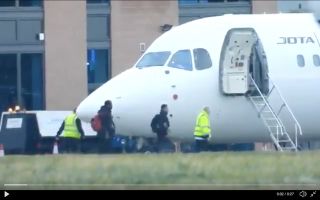 Some Manchester United fans will be delighted after seeing that the MEN’s Samuel Luckhurst has shared a video of Paul Pogba boarding the Red Devils’ plane.

Ole Gunnar Solskjaer’s side are preparing to jet off ahead of tomorrow’s clash against relegation candidates Watford.

Pogba has been sidelined for over two-and-a-half months, with his last outing for the Manchester outfit coming in the 1-1 draw against Arsenal.

Looks like Paul Pogba is back in the #mufc squad
?: Eamonn and James Clarke pic.twitter.com/WymuA7qPnZ

This is certainly a massive boost for United’s squad and couldn’t come at a better time – with the hectic festive period getting underway this weekend.

The Red Devils will have to be at their best to get a result against the Hornets, new boss Nigel Pearson was unlucky not to come away with some points in last weekend’s clash against Liverpool.