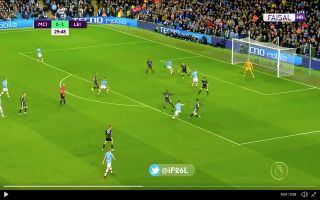 The 28-year-old charged towards the edge of the box before firing a shot towards the middle of the goal beat Kasper Schmeichel.

Mahrez’s equaliser came just minutes after his ex parter in crime Jamie Vardy opened the scoring for the Foxes.

Take a look at Mahrez’s equaliser against his former club below:

Mahrez is one of the silkiest dribblers in the Premier League, this is the kind of crafty goal that fans have come to expect from the Algerian star.