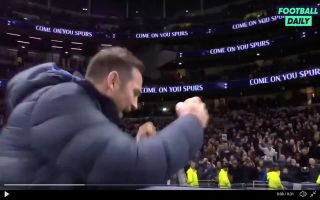 Lampard went towards Chelsea’s supporters and pumped them up even more with his passionate celebrations, it’s wonderful to see a manager that loves his club as much as this.

Lampard getting the best of his former boss Jose Mourinho will go down as a massive moment in the Chelsea legend’s managerial career.

Take a look at the Chelsea legend’s reaction at full-time:

If you do not think that Frank Lampard is the one for us then my god you have problems.

I haven’t seen us play like that for bloody years.

? WE’VE GOT SUPER FRANKIE LAMPARD, HE KNOWS EXACTLY WHAT WE NEED! ? pic.twitter.com/bnas3M7A8x

A win today was monumental for the Blues, the west London outfit came into today’s clash having lost three of their last four league games.