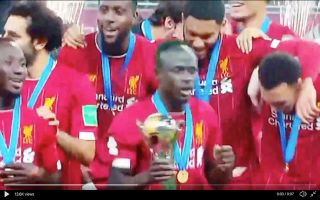 Liverpool superstar Sadio Mane seems like one of the purest players in football, the Senegalese star is the kind of player that everyone should find hard not to love.

After the Reds beat Brazilian giants Flamengo in the Club World Cup final, the Liverpool forward was filmed dusting off a tidy little shuffle to celebrate his side’s triumph.

It seems that after the 27-year-old realised that the cameras were focusing in on him, he decided to stop dancing and pass the trophy onto teammate Naby Keita.

This clip only emerged very recently, until then, some Liverpool fans were obsessed with captain Jordan Henderson’s shuffle with the trophy.

Take a look at the lovely moment below:

Sadio Mané doing a little shuffle- Then goes shy when he realises that the camera's are on him?? #clubworldcupwinner pic.twitter.com/Xhz3kxqP62

Considering the formidable Liverpool side that Jurgen Klopp has built, it’s fair to say that we can expect much more celebration clips like this in the coming years.