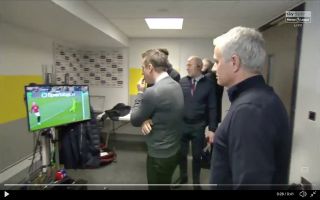 Whilst Sky Sports’ Geoff Shreeves was interviewing Jose Mourinho ahead of Tottenham’s crucial clash with Chelsea, Gary Neville caught the camera’s attention with his reaction to David de Gea’s error vs Watford.

In the 49th minute of Manchester United’s Premier League clash with the Hornets, De Gea appeared to let slip of the ball after Ismaila Sarr directed a volley towards goal.

Neville looked as though he couldn’t believe his eyes after seeing De Gea’s shock blunder, Jose Mourinho even joked about the retired star’s inability to control his emotions when it comes to the Red Devils.

Take a look at the moment below, courtesy of Sky Sports:

? It's fair to say @GNev2 could not believe what he was seeing there, watching David De Gea's error.

After finishing his interview with Shreeves, Mourinho also had a look at the screen and he was completely silent as he watched De Gea make a crucial mistake for the Red Devils.

Don’t you find it bizarre that Mourinho was completely unsurprised after seeing this?

Stats now show that De Gea has made the joint-most errors leading to goals since the start of last season’s Premier League campaign.