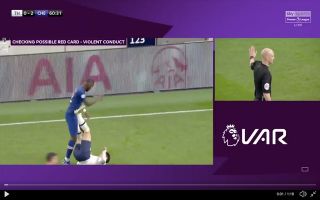 After being dispossessed by Antonio Rudiger, Son appeared to kick the Chelsea centre-back in the ribs.

This kind of dangerous behaviour has no place in the game and Son was rightfully sent off by the referee after VAR was consulted.

SON IS SENT OFF ?

The Spurs man kicks out at Rudiger and is shown the red card after a VAR check.

Son attempt to kick him. Not power but he did. Red card, deserved in my opinion. pic.twitter.com/KDrmYuPEnK

VAR correctly ruled that Son should be sent off, this is how football fans will want the game-changing technology to be used.