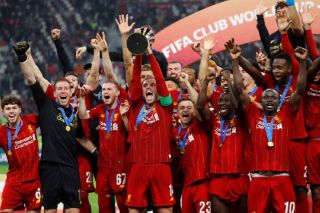 The England international has been in brilliant form for the Reds lately and has been influential in their recent successes. Succeeding Steven Gerrard as Liverpool’s captain is a huge responsibility and it’s fair to say that Henderson has done a fine job so far. Quite deservingly, the 29-year-old has lifted three trophies in 2019, the Champions League, the UEFA Super Cup and most recently, the FIFA Club World Cup.

Redknapp lavished praise on Henderson for his leadership and unselfishness. In his column for the Daily Mail, the former Liverpool captain wrote: “Jordan Henderson is making a habit of lifting trophies for Liverpool. To think his first official season as Reds captain ended with the club finishing eighth in the Premier League is remarkable.

“He took over from a legend in Steven Gerrard in 2015 and it was not the easiest time for him or his team-mates. Jurgen Klopp replaced Brendan Rodgers midway through the season and they eventually missed out on Europe. But look at Henderson now. A Champions League winner, a Club World Cup winner, and a Premier League winner in-waiting.

“All of this sudden success could not be happening to a nicer man. He’s unselfish. You may have a stinker on a Saturday but when you rock up at Melwood on a Monday morning, you had better be ready to pick up the pieces for your team-mates. He does that. He may have concerns about his own form, but he will always think about how he can help others first. He is the manager on the pitch to a certain extent. He is Klopp’s go-to guy, his earpiece.”

Henderson has done a remarkable job as Liverpool captain so far but his leadership isn’t the only reason why he’s always on Klopp’s team sheet. The 29-year-old is a pretty good midfielder and always seems full of energy on the pitch.

After leading Liverpool to Club World Cup glory, Henderson will be hoping to produce a fine performance on Boxing Day when the Reds take on Leicester City. A win will take them 13 points clear of the Foxes at the top of the Premier League table.