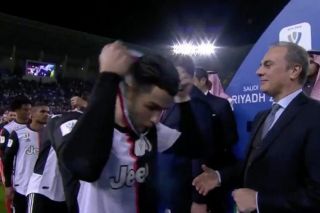 The 34-year-old is known to be fiercely competitive and is not someone who likes to lose. Ronaldo lost his first final since 2013 after Lazio beat Juventus 3-1 in the Supercoppa Italiana yesterday. Luis Alberto opened the scoring for the Biancocelesti before Paulo Dybala got the equaliser for the Serie A champions. Two second half goals from Senad Lulic and substitute Danilo Cataldi saw Lazio win their 5th Supercoppa Italiana.

During the presentation ceremony, a visibly disappointed Ronaldo took off his silver medal just after receiving it and also snubbed a handshake. This led to several fans slamming him.

What Ronaldo did is not a rare thing as many players have done that before. Nevertheless, he received plenty of criticism from many fans. Here are some of the Twitter reactions slamming the 34-year-old.

A champion also knows how to lose. He doesn’t.

The guy is still waiting for his handshake pic.twitter.com/5zwsOEOb0r

A champion also knows how to lose. He doesn’t.

That’s how arrogant he is

His attitude is really bad…