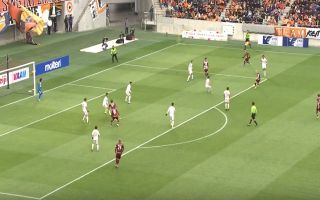 We see so little coverage of the Japanese leagues that it would be easy to think that Andres Iniesta had retired. We haven’t heard much from him lately, but he’s still going strong and scoring goals.

He’s actually helped Vissel Kobe get to the final of the Emperor’s Cup which gives him another chance to add to his glittering array of medals. They defeated Shimizu S-Pulse at the weekend, and the Spaniard set his team on the way with this fine finish:

Iniesta just scored this goal for Vissel Kobe in the Emperor’s Cup. pic.twitter.com/zxfrn9oUby

It remains to be seen if he stays in Japan after this season, but winning the cup would be a fine way to go out for the former Barcelona legend.