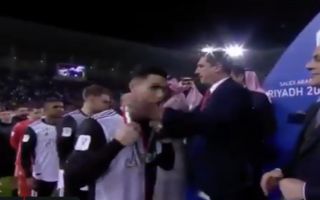 We always hear that the top athletes just hate losing and that’s what drives them on to achieve incredible things. While that might be true, you do need to show some humility in defeat and be a good loser.

Juventus went down to Lazio in the Italian Supercoppa at the weekend. Admittedly it’s not one of the biggest competitions in the world, but both sides still wanted to win.

This video shows Cristiano’s reaction immediately after getting his runners up medal, and it shows exactly what he thinks of it:

Ronaldo is not a fan of being second ?????pic.twitter.com/3Hp05ZFknT

The GOAT C. Ronaldo just got another medal ? today in the ITALIAN SUPER CUP. I guess he is already tired of collecting medals. See the speed with which he removed it ? pic.twitter.com/GRuGZFaR8o

Perhaps next time he can at least wait until he gets off the podium before taking the medal off..