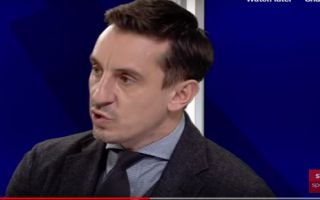 It would be surprising if we saw any major deals happening at Old Trafford next month – either incoming or outgoing – but that doesn’t mean there won’t be plenty of speculation about the future of some players.

Paul Pogba is one name who seems to crop up over an over. He’s clearly a player with a big reputation and he’s shown he can be genuinely world class, but that doesn’t always shine through for United. It’s not clear if he feels he’s too good for the club in it’s current situation, but it led to Gary Neville addressing the issue during Sky Sports’ coverage at the weekend:

It’s always fascinating to watch Graeme Souness in the background attempt to aim a dig at Pogba whenever he can, but Neville’s words do sound like a man who’s a bit fed up of the situation.

He talks about him needing to “settle down or leave” while he also alludes to his agent speaking out and him being linked with a move. He even hints that something might be going on behind the scenes, but it’s so rare to see big money thrown around in January so it would be a surprise if he goes next month.

Whatever happens, Neville is probably right. It’s becoming a distraction so the player and the club just need to make a decision and move on from there.