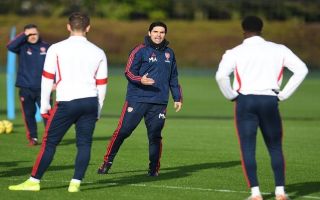 On the Athletic’s recent episode of the Chapman and Ornstein podcast, respected Arsenal correspondent David Ornstein shed some light on Mikel Arteta’s message to some Arsenal stars during a training session on Sunday.

Ornstein revealed that ‘quite a few’ of Arsenal’s players were using flicks to elude the defender during passing rondos during Sunday’s training session.

Arteta seemed to be unhappy with this and wasn’t afraid to pull up the Gunners stars on the issue, despite only being appointed as the new manager just two days earlier.

Here’s what Arteta reportedly told the Arsenal stars, as per the Athletic’s David Ornstein:

“They were doing the rondos and quite a few of the Arsenal players were flicking it with a trick to elude the defender.”

“Arteta stopped each time and said ‘you don’t do flicks like that during the match, so why are you doing them now.”

Ornstein added that Arteta urged Arsenal players to “put your foot on it, even if it takes a split second longer and play the pass!”

Some Arsenal supporters will be pleased to see that Arteta is taking a seemingly no-nonsense approach tot training from the get-go.

Considering Arsenal’s woes recently, it’s clear that perhaps something wasn’t right with players’ performances on the training ground – Arteta clearly wants the team to approach practice just like a match.

Arteta captained the Gunners during his five-year spell with the north London giants, do you think he has the leadership and coaching ability to inspire a change in fortunes for Arsenal soon?