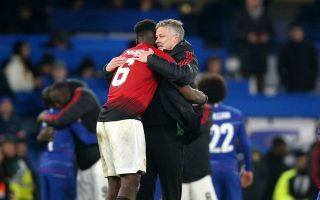 According to the Manchester Evening News, Manchester United manager Ole Gunnar Solskjaer has hinted that superstar Paul Pogba will start for the Red Devils in their Boxing Day clash against Newcastle.

Pogba made his return from a two-and-a-half-month injury layoff in United’s 2-0 defeat to relegation candidates Watford last time out.

The Frenchman came off the bench in the 64th minute and made a positive impact for the struggling Red Devils, take a look at the highlights of Pogba’s performance here.

The former Juventus star was lively on the ball and appeared to make things tick, perhaps United will get their season back on track now that the enigmatic’s midfielder’s back.

With Pogba returning from injury, can Manchester United get their season back on track?

Here’s what the United legend had to say about the World Cup winner:

“Let’s see how he reacts to this, how he feels, he did really well when he came on. Big, big plus.”

“It might be that we do get him in from the start because you just want to get more and more into the team when he plays.”

Solskjaer also went on to praise Pogba’s versatility and even lauded the Frenchman as the ‘best all-around midfielder in the world’.

Pogba looks much more capable of impacting games when he’s utilised in a free role at the tip of United’s midfield.

Facing Steve Bruce’s Magpies will certainly be a difficult task for this inconsistent United side, the Tyneside outfit have won three of their last four Premier League games.

Solskjaer’s men should be itching to get their own back against Newcastle, the Red Devils were defeated 1-0 when the sides met earlier in the season.