The 10s won’t go down as the best decade for Arsenal, but that’s not for the lack of great players they’ve had at the club in that time.

In fact, they’ve been so richly blessed with attacking talent that we’ve failed to get a *lot* of very good players into our XI below.

MORE: Video: Mikel Arteta’s emotional final interview as an Arsenal player shows how much he loves the club

Defensively, it’s a little less inspiring, but when there’s no room for Mesut Ozil, Aaron Ramsey, Pierre-Emerick Aubameyang, Alexandre Lacazette or Samir Nasri, you must be doing something right in the final third of the pitch.

Anyway, as we edge ever closer to 2020, see below for our full Arsenal team of the decade:

This may not go down too well, but it seems I’m one of the few Arsenal fans who doesn’t look back at Wojciech Szczesny with rose-tinted glasses.

Yes, selling the Polish shot-stopper when we did may have been a mistake as he’s gone on to be pretty good at Juventus, but he rarely had a long run of consistently strong performances for us. Quite often his attitude didn’t seem quite right and the numerous costly errors he made reflect that.

Petr Cech was ultimately signed too late in his career and never looked anywhere near his best, so forget him.

That really only leaves Bernd Leno. An underrated recent signing who’s done his best despite an absolutely awful defence in front of him. A proper goalkeeper who will surely only get better once Arsenal generally sort themselves out.

He left on a sour note, no doubt about it, but Laurent Koscielny still deserves to be remembered fondly by every Gooner.

The Frenchman was a heroic defender and a real big-game player with some important goals at crucial moments.

Was he ever really the best in the world? Probably not, but many top teams would’ve had him and we’re lucky we got so many years of great service out of him.

A cult hero for his strong performances and ability to make the most out of what was admittedly limited talent. A real leader who came back from a lengthy injury to make his only appearance of the season in Arsenal’s FA Cup final win over Chelsea in 2017, shutting out Diego Costa, Eden Hazard and co. with a rock-solid display. Iconic.

It’s difficult to leave Hector Bellerin out, but there’s no denying Bacary Sagna has made more of a mark at the Emirates Stadium.

Signed as a relative unknown from Auxerre back in 2007, Sagna quickly established himself as one of the finest all-round full-backs in the game, giving Arsenal more aggression at the back, and providing a quality outlet going forward with his pace and good delivery.

An inspired signing in the end, Nacho Monreal was similar to Bacary Sagna when he arrived in that he didn’t look the most glamorous big-name buy in the world, but went on to become a cult hero through sheer effort and passion for the shirt.

Yes, it was a long time back in this decade that Cesc Fabregas left Arsenal, but have they really had a better midfielder since?

The classy Spaniard was pretty much at his peak in the 2009/10 and 2010/11 seasons just before he earned his big move to Barcelona, and even though he may have ended up winning more at Chelsea upon his return to the Premier League in 2014, he was arguably never better than those early years of this decade with Arsenal.

A magician with the ball at his feet and a player who always seemed to have a smile on his face, Santi Cazorla partners Fabregas in this dream midfield combination that never was.

One can only imagine how good Cazorla might have been if he’d stayed fit more, or if he’d joined the club earlier and had the chance to play with the likes of Fabregas and Robin van Persie, but he was still more than good enough to make our Arsenal team of the decade.

It’s not easy leaving Aaron Ramsey out of this list, but despite his longevity and undoubted quality, he’s some way off Fabregas and Cazorla at their best.

Not everyone’s cup of tea, but Theo Walcott has surely earned his place here: an honest, hard-working, no-thrills footballer who consistently delivered for Arsenal.

Sure, in many ways he never hit the heights expected of him when he first burst onto the scene as a 16-year-old, but he finished with over 100 goals for AFC, including one in an FA Cup final victory, and he loved a North London Derby too.

Currently known for being one of the biggest Manchester United flops of living memory and farmed out on loan to Inter Milan, Alexis Sanchez was not so long ago actually a world class performer for Arsenal.

The Chilean arrived from Barcelona in 2014 and instantly settled in England, becoming one of the deadliest all-round forwards in the game.

His combination of pace, strength, skill and sharp-shooting made him a nightmare for Premier League defenders, and he deserves to be remembered fondly for his biggest contributions to the club – two goals in two different FA Cup final victories.

A player one imagines Arsenal fans will appreciate more as time goes on, Olivier Giroud recovered well from a slow start in north London to become a genuinely excellent target man.

More than just a poacher, Giroud scored some goals of delightful individual quality, and his touch and presence in the box meant he was always a great outlet for his team-mates in terms of linking up play.

Aubameyang and Lacazette are both probably the more instinctive finishers and enjoy the benefits of better pace, but Giroud remains arguably one of the most underrated players in the Premier League of the last decade.

It would be impossible to leave him out, even if, like Sanchez, he tarnished his reputation by moving to Man Utd.

At the start of this decade, Robin van Persie was quite simply unplayable for Arsenal, scoring at a ridiculous rate for some of their less glamorous teams that didn’t always give him the quality of service he deserved.

The Dutchman left Arsenal with 132 goals – eighth on their list of all-time top scorers – and will surely one day be remembered as a club legend once fans can grow to forgive him for winning his only Premier League title at Old Trafford. 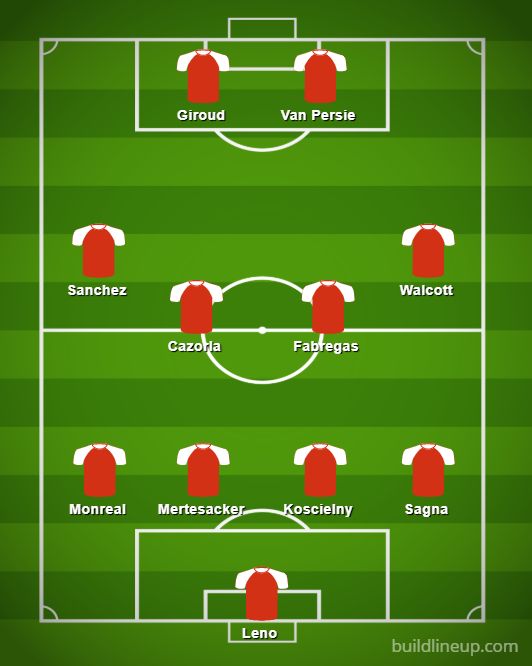