Chelsea have been extremely successfully during the 10s, with Roman Abramovich’s side winning 10 major trophies this decade.

Most of Chelsea’s old guard dominate our eleven, with some modern superstars making the cut. With fierce competition for places – some Premier League legends have been left out.

The Czech star is certainly a strong shout for the league’s best goalkeeper of the decade, so this choice is one of a few no-brainers that we’ve made.

As per BBC Sport via Opta, Cech has made the ninth-most Premier League appearances of everyone this decade. Considering that the shot-stopper retired this summer and that he was used sporadically in his final season at Arsenal – this achievement looks even more impressive.

Cech has also won the league’s Golden Glove on three occasions over the last 10 years, he’s not just the decade’s best – he’s one of Chelsea’s and the league’s all-time greats.

Who steadied the ship after Chelsea’s illustrious legends left the club in the early 10s – look no further than Cesar Azpilicueta.

The Spaniard, who goes by Dave since moving to west London – is the epitome of the phrase Mr. Reliable, both on and off-the-pitch.

In the summer of 2012, the Blues signed the versatile Spaniard for just £6.5m, as per BBC Sport, Azpilicueta’s signature has proved to be one of the bargain moves of the decade.

This spot was arguably the most difficult to decide, both Ivanovic and former captain Gary Cahill were wonderful servants to the Blues, but the tough Serbian snatches this spot.

Whilst Ivanovic didn’t play much football at centre-back, as the right-back spot was his own before Azpilicueta’s arrival, we think he’s the best option to partner captain fantastic John Terry.

Whilst he seemed as the most no-nonsense defender you’d ever come across, Ivanovic popped up with plenty of crucial goals for the Blues.

The Serb scored a magnificent late winner for Chelsea in the 2013 Europa League final.

9 of Terry’s 15 major trophies with the Blues came during this decade, with the former Chelsea skipper ever-present for the west London outfit before hanging up his boots.

When someone says ‘Captain. Leader. Legend’ – this is the kind of player that football fans would immediately think of.

There’s no doubting that Terry is one of the best centre-backs to ever grace the Premier League.

No one has come close to replacing Ashley Cole since he left Chelsea, so this position really couldn’t be filled by anyone else.

The Londoner, who has over 107 England caps to his name, only decided to hang up his boots five years after leaving the Blues.

Cole still holds the record for the most FA Cup wins with 7. There’s no doubting that he’s still firmly the best ever left-back to hail from this country,

In the summer of 2016 Chelsea signed Kante for a fee of around £30m, as per BBC Sport. The tireless midfielder’s heroics helped inspire Leicester City to one of the most memorable Premier League triumphs ever.

Kante continued to dominate the league after moving to west London and the Frenchman has completely changed how defensive midfielders are seen in the modern game.

2017’s PFA Player of the Year winner has hardly put a single foot wrong since starting to ply his trade in England’s top-flight.

He’s also one of the nicest men in world football.

Although Lampard began to approach the end of his career at the start of the decade, he still managed to showcase himself as the league’s best ever goal-scoring midfielder before heading to the MLS before retiring.

Lampard is now hoping to mirror the success he had during his playing days whilst he manages the Blues.

Cesc Fabregas would have been the alternative to Lamps in this spot, but even the Spaniard – who was crucial for the Blues during two title-winning campaigns – comes nowhere near the Chelsea legend.

If it’s any consolation, Fabregas did make Arsenal’s team of the decade.

The right-wing spot is probably the weakest – by this team’s incredible standards. We think that Willian is the go-to option here.

This was a real tight call and if we didn’t go for Willian, we’d have gone for Florent Malouda – he was phenomenal in the early 10s before leaving Stamford Bridge.

According to BBC Sport, the Blues parted with £30m to sign Willian from Russian outfit Anzhi Makhachkala.

The 31-year-old has certainly had plenty of ups and downs during his time in west London – but like many players in this side, Willian has turned up with goals and assists at crucial moments.

Another one of Chelsea’s modern superstars partners Willian on the flanks, Eden Hazard’s inclusion in the side was another no-brainer.

The Belgian ace has probably been one of the most exciting players to watch in England’s top-flight over the last 10 years, with the Real Madrid summer signing effortlessly gliding past defenders during his time in the Premier League.

As per BBC Sport, the Blues signed the tricky attacker for £32m from French outfit Lille in the summer of 2012.

The starlet who arrived as a fresh-faced 21-year-old lived up to his potential and some during his time with Chelsea.

There’s no disputing that every successful team can only function to its fullest with a player like Diego Costa going to war for them.

The west London outfit signed the gung-ho Spaniard from La Liga giants Atletico Madrid for £32m, as per BBC Sport.

At his best for the Blues, Costa was the kind of complete striker that any team needs to fire themselves towards a Premier League title.

Even when things weren’t actually going too well for the Spaniard, you could never question his commitment, desire or passion.

According to BBC Sport via Opta, the Spaniard has the third-best conversion rate of players to play in the Premier League that have scored over 50 goals.

Costa scored 59 goals during his three-year spell with the Premier League giants.

His fierce ability on the pitch is well-documented, if this man lined up against you with his long sleeves on – it was going to be a long day for any top defender.

As well as his unbelievable goalscoring ability, Drogba is one of the most respected African players of all-time.

Drogba should be shoe-in for the Premier League’s team of the decade as well as the Blues’. There aren’t enough words to do this man justice. 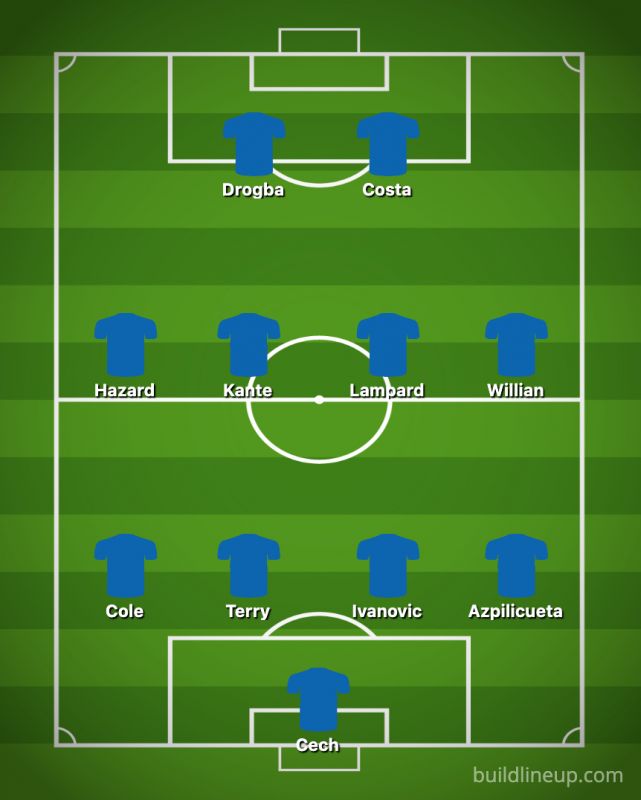