It’s probably a bit much to try and coin a new cliche of “a decade of two halves” but it’s certainly clear that the past ten years were split between Sir Alex Ferguson’s reign and then everything that followed.

There might be signs that things are turning round now, but the David Moyes disaster set the team back several years so it was always going to take a while to recover.

When constructing this team it seemed important to ignore a lot of players who played and had their best years between 2000 and 2009, but it actually looks like the tail end of some careers were still better than the prime years of some of the current squad.

There’s a heavy reliance on the Sir Alex Ferguson signings in this team, but it’s difficult to make an argument for most of the current players.

It does feel like it’s either feast or famine in the Manchester United goal. We’ve seen greats like de Gea, Peter Schmeichel and Edwin van der Sar alongside players like Ben Foster, Tomasz Kuszczak and Roy Carroll over the years.

De Gea might have tailed off a bit in the past year, but he’s still one of the best goalkeepers in the world and you could argue the club might have been in an even worse state if it wasn’t for his saves. There’s been times when it’s felt like the Spaniard has had single handedly won games for United and he’s come a long way from the mistake-prone and weak looking keeper that first arrived from Atletico Madrid.

He might still be suspect from crosses at times, but there’s a legitimate case to be made for de Gea being United’s best player of the decade.

The evolution of Valencia over the years has been interesting to watch. When he first arrived he was lightning quick and would take players on for fun, that trait disappeared over the years as he would often just stand in front of a defender and hope they might move out of the way and let him get a cross in.

His pace and sheer determination led to him having a successful rebirth as a full back. He clearly worked on his positioning and defensive awareness as the years went on, but his aggression and quickness allowed him to make up for any defensive deficiencies that he had.

He’s not good enough to go down as an all time great, he played a lot of games and will be fondly remembered, but his constant presence is a big sign of how far the club dropped off over the years. Aaron Wan-Bissaka looks like an obvious upgrade and if he can improve his attacking skills, then he might end up as a genuinely top class option.

There’s no doubt that the turn of the decade saw the Serbian start to decline, but as long as he wasn’t facing Fernando Torres he still seems like a better option than the likes of Phil Jones, Marcos Rojo, Chris Smalling or anyone else who has featured.

At his best he was utterly dominant in the air and his snarling aggression would scare the life out of his opponent as he gave them no room to do anything. Injuries and age did start to catch up with him, but he still had some great years in this decade and the competition for this position is pretty low.

Similarly to the inclusion of Vidic, these weren’t Ferdinand’s best years but he’s still miles ahead of those who came after him. His pace did start to fade but he notably improved his positioning and his concentration got better as the years went on. It’s possible that he was forced to pay more attention as he couldn’t rely on his quickness to bail him out anymore.

The inclusion of Ferdinand and Vidic in here is a damning indictment of all the players that came after them, as the tail end of their careers still looks better than other players who were supposedly playing at their best. The defence has been poor for a while and only the presence of David de Gea allowed the team to hand around the Champions League spots after Ferguson left.

It’s highly likely that this place would’ve gone to Luke Shaw if he didn’t suffer that horrendous injury against PSV. There were times where Shaw looked unstoppable and was probably the main attacking threat in the team, but he’s not got anywhere near those standards since the injury.

Patrice Evra is a fine example of a player who got better as he got older. He wasn’t tall but was surprisingly effective in the air and his presence as a leader and a likeable character with the fans will see him go down as one of the most fondly remembered players in recent years.

He was virtually ever-present until he left to join Juventus in 2014 and probably wasn’t fully appreciated until after he left. Solid defensively and a threat going forward, he’s probably the pick of the back line.

Another player who it’s much easier to appreciate after he’s gone. It’s fair to say that this current United side would pay a lot of money to get someone like Michael Carrick in his prime just now. He was outstanding at linking the defence and the midfield and always kept the ball moving, but also had the ability to ping a penetrating pass from deep.

He’s the type of elegant player who might have been more appreciated if he played abroad, but his presence and contribution wasn’t lost on the United fans. He also had the ability to fill in at centre back, and should go down as one of the greatest Premier League midfielders in recent times.

This place should belong to Paul Pogba when you consider how much talent he has, his tendency to go missing when it matters and putting himself over the team at vital moments – those penalty run ups are the perfect example – demonstrate why he isn’t the team player that United need.

I’ll move on before this turns into a Graeme Souness style rant, so the other central spot goes to Ander Herrera. Criminally under rated and another perfect example of not knowing what you have until it’s gone.

He was billed as an elegant number 10 when he came from Bilbao, but he proved he can be the complete midfielder. He could control the game if he needed to, would run around and cover the whole pitch when required and would doggedly mark the opposition’s star player out of the game when given that task.

He’s the closest thing to the complete midfielder that United have had in the past few years, and seems like the kind of player that Sir Alex would’ve used to his maximum potential if he had him in his prime.

It’s been a long time since United had an outstanding right winger, so this shouldn’t be seen as a ringing endorsement for Nani. We’ve seen Juan Mata played as a kind of wide play maker, Jesse Lingard could be stuck on the right if needed while Daniel James might prove to be the long term solution, but it’s not been a strong point for a while.

Nani was unbelievably frustrating as a player, but did have an outstanding couple of seasons at the start of the decade. He was great with the ball at his feet and always kept the defenders guessing, unfortunately he often kept his teammates guessing as nobody knew what he would attempt to do next.

He could’ve been an elite talent if he stayed fit and found more consistency, but he still produced some great moments.

Finally we can start to get to some of the genuinely excellent players from the past ten years. His legacy might be slightly tainted by staying around too long and he became a liability in the end , but at his peak he was unstoppable and carried the team through games.

The 2011-2012 season was the particular highlight, he scored 34 goals and suddenly started to score headers in every game, that was widely credited to the fantastic deliveries from Antonio Valencia also in this team, but he was genuinely fantastic and kept them in the Champions League final defeat to the great Barcelona team.

An all-time England and Manchester United great, his last couple of seasons weren’t his best but probably the best player in the team when he was on form.

The past few weeks have played a big part in this inclusion, but it’s well deserved. He represents what Manchester United stand for as a club, he came through the academy and plays with pace and ambition. When he’s on form he’s exciting to watch and he’s shown he can carry a poor team to victory this season.

He probably suffered under Jose Mourinho as he loves to try and shackle the talented and unpredictable players, but he’s finally broken out and already has the most goals in a single season this year and there’s still months to go.

He looks like he should be a megastar for the club over the next few years, but is well worth his inclusion in this team.

It showed just how much Arsenal had fallen away when they allowed van Persie to join United in 2012. In hindsight it looks like Sir Alex Ferguson bought him as one final weapon to use in his final year, but he was utterly devastating that season and led United to an easy title victory.

He scored 58 goals in 105 games and looked like the perfect striker for the team. He could finish when slotted through on goal, could produce something in a crowded box or if all else fails you could just thump a long diagonal that he would volley in from distance. Exciting to watch and incredibly clinical, at his best he was one of the best strikers in world football.

It’s not even up for discussion, David Moyes was a shambles, Louis van Gaal and Jose Mourinho sucked the joy out of Old Trafford and Ole Gunnar Solskjaer is starting to turn things round, but it’s not even close.

Scott McTominay – This is a clear case of the Scottish bias coming in, but he’s starting to become invaluable to the team and it’s always great to see a youth player come through. Relentless energy, up for a scrap and capable of grabbing the odd decisive goal, he’s not good enough for the squad at this point but is a shining light of recent years.

Zlatan Ibrahimovic – He ran van Persie close and did manage 28 goals in his first season, but the injury ruined him and he never looked like getting back into the team. He shut up every doubter who claimed he couldn’t do it in the Premier League and will be fondly remembered at Old Trafford.

Paul Scholes –  A wonderful player who came back from retirement to ensure another title win,, he was still brilliant but his legs had gone at that point. One for the best team of all time, but still had some nice moments in this decade. 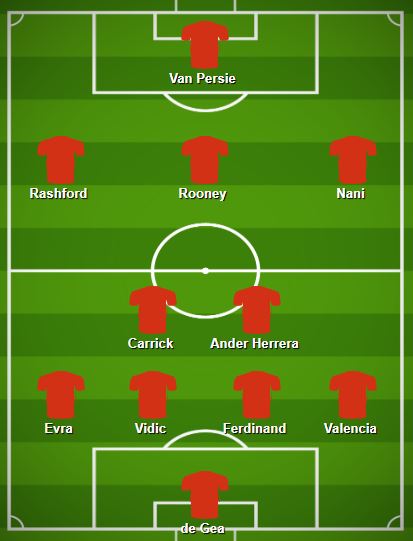 The signs of recovery are there, hopefully this time in ten years we will see a team full of players at their prime who were among the best in the world.