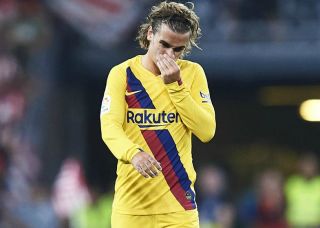 Antoine Griezmann said that he joined Barcelona to experience a new style of football.

The Blaugrana signed the French international from Atletico Madrid this summer for a transfer fee of €120 million as claimed by their official website. Griezmann has so far amassed eight goals and four assists in 23 appearances across all competitions this season.

The Frenchman said that his reason for leaving Atletico Madrid wasn’t winning titles but because he wanted to experience a different style of football. As quoted by Goal.com, the 28-year-old told UEFA.com: “I did not leave Atlético to win the Champions League or win more titles. I came here to Barça to learn a new style of play, a new philosophy and to grow on a personal level.  Atlético can also win the La Liga and the Champions League, they have the team and the coach to do it.”

Griezmann has formed a pretty strong attacking partnership alongside Lionel Messi and Luis Suarez at Barcelona with the trio amassing  combined 36 goals and 22 assists across all competitions so far. The French international will be needed to be at his best if the Blaugrana are to win the La Liga and the Champions League.

Barca’s next fixture will be their first of 2020 against Espanyol next weekend.