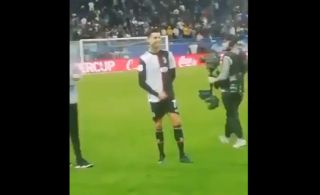 The Juventus forward won’t have been happy after his side’s defeat to Lazio in last week’s Supercoppa, and fans of the Rome giants took the opportunity to rub salt into his wounds.

Ronaldo then responded by grabbing his crotch in a rather rude gesture back to Lazio fans.

Messi, of course, recently moved ahead of Ronaldo on Ballon d’Or wins, so no wonder these chants may have hurt a little more than usual!