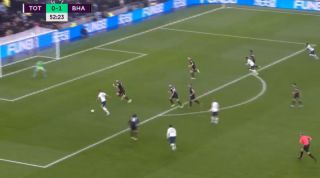 Tottenham have equalised through Harry Kane in their Premier League clash at home to Brighton today.

Adam Webster had given the visitors a surprise lead in the first half, but Kane has now powered home a well-taken goal to make it 1-1 and give Spurs hope of grabbing a win.

His eighth goal in five Premier League games on December 26.

Turn on @NBCSN now as Tottenham are level against Brighton. #THFC 1-1 #BHAFC pic.twitter.com/pf6yYadDFL

Kane has been on fire for Tottenham in recent times and has kept up a particularly strong scoring record on Boxing Day.

The England international has now netted eight times in these festive fixtures, showing he clearly loves the football at this time of year!