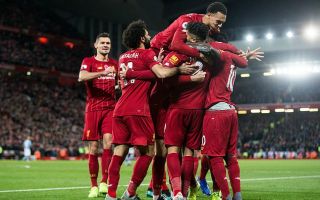 Liverpool fans are enjoying this game against Leicester City, with the Reds unlucky not to be more than 1-0 up at the King Power Stadium.

It’s been a fine first half performance from Jurgen Klopp’s side, with the midfield trio of Jordan Henderson, Naby Keita and Georginio Wijnaldum looking particularly dominant so far.

LFC fans will hope they can continue this form in the second half, but for now they’re just sitting back and enjoying the way their midfield is clicking so convincingly.

Many were pleased beforehand that Keita had earned a rare start for such a big game, and it’s fair to say the Guinea international has stood out with some moments of real quality.

Still, the work that unsung hard-workers like Henderson and Wijnaldum do also deserves plenty of attention, with Liverpool somehow not looking like missing a player as good as Fabinho at all, which is some achievement.

Hendo and Naby running the show if we’re being honest

Naby, Hendo and Gini absolutely battering Leicester. Another half like that and the result is a formality.

That was hands down Liverpools best first half performance all season. Outstanding retention under strong press. Gomez is VVDs number one for me. Also Naby alongside Gini and Hendo works perfectly. I've wanted to see that again for a while. #LEILIV

What a half man. Backline is superb, midfield dominant, front 3 need to be more clinical tonight

Fantastic 1st half from Liverpool, should be ahead by more but Keita and Henderson running the show. We've kept Maddison and Tielemans quiet which in turn keeps Vardy quiet.

Superb 45 mins Keita and Gini class but captain Henderson best player on pitch by far. Controlling tempo picking up every ball in front of back 4 and looking for forward pass

Naby Keita looks absolutely sensational. What a player. His dribbling is out of this world. And he has a proper engine. Shows the depth in midfield LFC now have in the Klopp era. An array of talent at the German’s disposal.

Gini & Hendo Controlling The Midfield
What A Lovely Sight