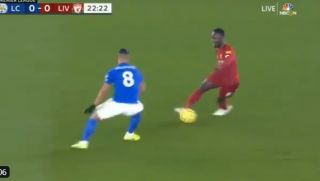 Liverpool midfielder Naby Keita is having a superb game against Leicester City so far.

Reds fans were thrilled to see the Guinea international handed a rare start by Jurgen Klopp this evening, and he’s certainly repaying that faith shown in him.

Watch the video above as Keita dances his way past two Leicester players with some superbly fancy footwork.

Eventually, James Maddison has no choice but to hack Keita down – that was the only way to stop him!