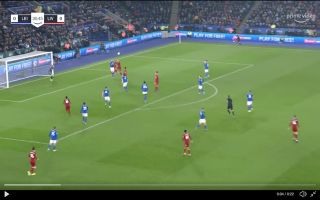 In the 30th minute of tonight’s mammoth Premier League clash between Liverpool and Leicester, Trent Alexander-Arnold delivered a dangerous ball into the box from around 40 yards out.

The England international’s brilliant delivery flew into the path of Roberto Firmino and Mohamed Salah, it was the Brazilian who towered above Ben Chilwell to head the ball into the back of the net.

Alexander-Arnold now has three more Premier League assists than any other player this year.

Take a look at the Brazilian’s opener below:

Jurgen Klopp’s men are capable of scoring all kinds of goals, the Reds are a real force to be reckoned with.