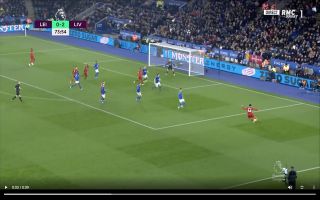 In the 73rd minute of today’s Premier League clash between Leicester and Liverpool, James Milner laid the ball off to Trent Alexander-Arnold as he was marauding down the right-flank.

The England international drilled a low cross into the box and Roberto Firmino expertly controlled the ball before slotting it into the back of the net.

Firmino looked as though he was in a training drill as he tucked the ball away effortlessly.

Take a look at the Brazilian’s second of the game below:

Liverpool have picked apart the second-placed team in the league with ease. This Reds side is unbelievable.