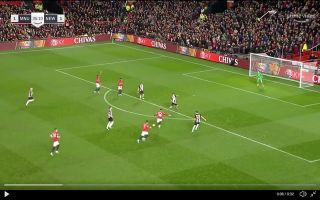 In the 35th minute of Manchester United’s Premier League clash with Newcastle, Magpies defender Fabian Schar made a costly error by gifting the ball to Mason Greenwood.

Greenwood showed that he’s not one to turn down a late Christmas present as he controlled the ball and charged forward before smashing the ball into the roof of the net from the edge of the box.

Newcastle stopper Martin Dubravka had no chance of stopping this rocket from the United ace.

Take a look at the highly-rated talent’s exceptional strike below:

Wow, what a strike ?

Greenwood is certainly one of the Premier League’s and country’s biggest talents, with a killer finishing ability like this, there’s no doubt that he has the potential to go to the very top.