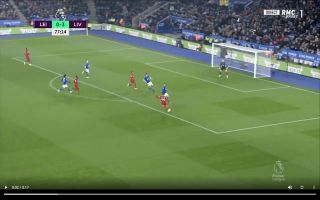 In the 77th minute of tonight’s mammoth Premier League clash between Leicester and Liverpool, the Reds showed their killer instinct on the counter-attack.

Liverpool superstar Sadio Mane played the ball into Trent Alexander-Arnold’s path and the England international hammered the ball into the back of the net with a brilliant low finish.

Alexander-Arnold had a hand in all four of Liverpool’s goals this evening, the ace registered two assists and a goal, the full-back also won the Reds’ penalty that James Milner converted.

Take a look at the right-back’s goal below:

There aren’t many 21 year olds in world football that are playing anywhere near as crucial a role as Alexander-Arnold is for Liverpool.