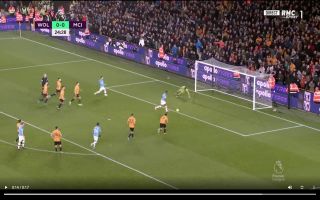 In the 20th minute of tonight’s Premier League clash between Wolves and Manchester City, the Premier League champions appealed for a penalty after Riyad Mahrez was brought down by Leander Dendoncker.

VAR was used to review the challenge and Pep Guardiola’s side were awarded a penalty, Raheem Sterling stepped up to the spot.

The England international saw his effort saved by Rui Patricio, however a retake was ordered by VAR for encroachment.

Sterling stepped up again and saw his spot-kick saved once more, but he reacted quick enough to tap in the rebound.

Take a look at the incident that led to the penalty and Sterling’s first penalty attempt below:

Sterling tapped the ball into the back of the net after his second spot-kick was saved:

Patricio will feel incredibly unlucky after making two penalty saves – just for the ball to still end up in the back of his net.