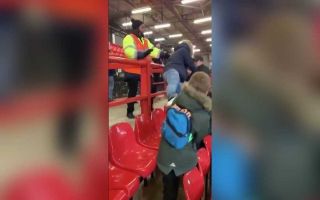 A shocking clip has emerged of a Bristol City supporter fighting with a female steward and young child whilst watching the side’s 3-2 defeat to Charlton on Boxing Day.

Whilst fighting another Bristol City supporter, this disgraceful fan turned to a young child and kicked him. The man also fought with a female steward that was attempting to apprehend him.

Bristol Live have since reported that those involved were known to each other and that the incident wasn’t related to the football match.

Take a look at the unsettling incident below:

Bristol City fan attacking a child and a woman. Who is this scum? pic.twitter.com/E6Np8I62AX

Bristol city fan:
Name and shame and get this muppet out our football stadiums, never allow him to enter another ground again. pic.twitter.com/xCaNQoRIoT

This is absolutely disgraceful, we hope the offender is firmly dealt with by both the club and authorities.