Still, read on for our top ten football games of the decade as the 2010s near their end:

A scoreline that, even now, really makes you rub your eyes and look at it again. Much was made at the time of quite how bad Arsenal were that day, but credit must also go to Man Utd for a superb performance.

Ok, if you’re making Ashley Young look like Cristiano Ronaldo then you probably do need to have a look at yourselves, but this match also featured some scintillating displays from the likes of Wayne Rooney and Nani for a United side who were thrashing most teams they came up against in that period at the start of the 2011/12 season.

Bayern Munich beating Wolfsburg wouldn’t normally be anything to write home about, but the nature of this victory and *that* performance from Robert Lewandowski means it has to make our list.

Wolfsburg went in at half time 1-0 up at the Allianz Arena, before Pep Guardiola introduced Lewandowski from the bench. The Poland international then produced an individual performance quite unlike anything we’ve ever seen with FIVE goals in the space of just nine minutes.

Going into the 2014 World Cup, Spain looked unstoppable after three international tournament victories in a row.

On their opening game of this tournament, however, they were absolutely swept aside in some style by a rampant Dutch side, who dealt the world’s dominant team a humiliating defeat that they’ve arguably never recovered from.

And of course, it featured *that* Robin van Persie diving header – one of the most iconic goals of this decade without a shadow of a doubt.

No, we’re not biased because this game was recent, it was an absolute banger. Ajax got a fine 1-0 win away at Tottenham in the first leg to go into the second game as major favourites. They then quite quickly went 2-0 up and the tie looked over.

Step forward Lucas Moura, who produced a quite stunning hat-trick to complete a remarkable late turnaround. First, the Brazilian struck twice in the space of four minutes at the start of the second half, but it didn’t look like it would quite be enough as we approached the closing stages.

Then in quite literally the final seconds of the game Moura got one final chance and steered the ball home to book Spurs’ place in their first ever Champions League final. Fairytale stuff.

Arsenal and Liverpool to go head-to-head for the signing of Juventus star
(Photo) Man United star returns from injury, pictured in training
Manchester United tried to sign Real Madrid star in January and will try again in the summer

Leicester City’s game of the decade, even though they didn’t play in it. This battle at Stamford Bridge had a bit of everything, and in the end Chelsea’s comeback from two goals down meant Tottenham could no longer mathematically catch Leicester at the top of the table.

The fact that Chelsea had nothing to play for at this point as they slumped towards a 10th place finish somehow makes this all the sweeter, with the Blues – and Eden Hazard in particular – putting in one of their performances of the season simply to deny their rivals a title victory.

As a result, we were treated to one of the biggest footballing shocks of all time, let alone of the last ten years, with Leicester overcoming pre-season odds of 5000/1 to win the Premier League. Over three years later, it’s still hard to believe this really happened.

Chelsea were not really the best team in Europe this season, but their Champions League victory came about through some truly impressive grit from a depleted side managed by Roberto Di Matteo of all people, and it’s hard not to acknowledge they fully deserve a place in the finest moments of this decade.

In fairness, it was a toss-up between including this game or Chelsea’s semi-final comeback away to Barcelona, but Didier Drogba’s one-man show at the Allianz Arena just about did it for us. 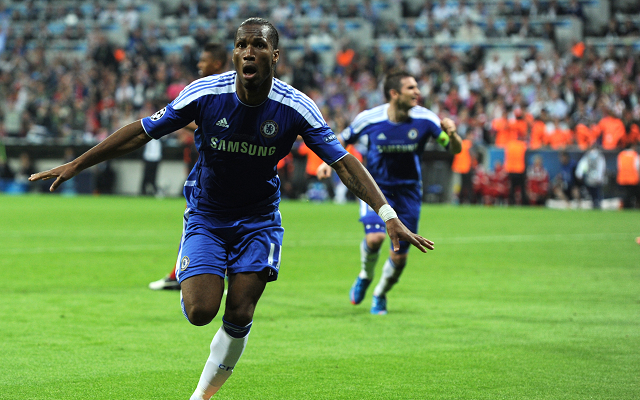 It says something about this decade that this game is only fourth, with Manchester City clinching the Premier League title with pretty much the last kick of the season.

Manchester United’s win at Sunderland on the same day meant that they were top of the table when the full time whistle blew on their season, but minutes later City scored two late goals, including Agueroooooooooooooo in the dying seconds of stoppage time to turn things around and beat QPR 3-2.

City’s success since then has come about rather more comfortably, but this title was the one that started it for them and the manner in which they won it will never be forgotten.

This was just utter madness, with Paris Saint-Germain 4-0 up from their first leg and facing what should’ve been a smooth passage into the next round of the Champions League in 2016/17.

Barcelona had other plans, however, racing into a 3-0 lead to really put the pressure on, only to then find themselves with an even bigger mountain to climb as Edinson Cavani grabbed an away goal at the Nou Camp.

This meant Barca needed to score three in the final half an hour to have any hope of going through. By the 88th minute, you could forgive a large chunk of their fans for starting to walk out.

And yet, somehow, the home side, inspired by Neymar, got the three goals they needed in the space of just seven minutes. Neymar scored a sensational free-kick in the 88th minute, a penalty in the first minute of stoppage time, and chipped in a brilliant ball for Sergi Roberto to cause an earthquake of celebration in the final seconds. Truly, one of the greatest Champions League comebacks ever…

…Not as good as this one, though.

You’ll be painfully aware of this one by now, but with Barcelona 3-0 up on aggregate after thrashing Liverpool in the first leg of this Champions League semi-final, the return fixture looked like it would surely be a formality.

Liverpool didn’t read the script, though, and took an early lead through Divock Origi. Still, only 1-0 up at half time, they had plenty to do against Messi and co. in the second period.

Somehow they managed it, though, with Georginio Wijnaldum netting a quickfire double to level up the aggregate score before a superb piece of quick thinking from Trent Alexander-Arnold saw him play the cheekiest corner ever, giving Origi his second of the night and a place in Liverpool folklore.

The Reds of course went on to beat Tottenham in the final in June, and this special side continues to dazzle as the year comes to a close, with the next decade surely set to see them win their first Premier League title in 30 years.

It’s hard to put this one into words, but as individual matches go, it’s one of the most bizarre results in sporting history, let alone football.

Brazil, hosting the World Cup and hoping to win the competition for a sixth time, were utterly, utterly dismantled by a rampant Germany side in this semi-final, with the crowd in shock and many home fans in tears as Joachim Low’s men went 5-0 up inside the first half an hour.

The goals just would not stop flying in, with Germany eventually 7-0 up in the second half before Oscar scored the most meaningless of consolations for Brazil.

It was sheer humiliation for a great footballing nation and a wonderful night for Germany on their way to winning the trophy, with the added bonus of Miroslav Klose scoring to become the top scorer in World Cup history.