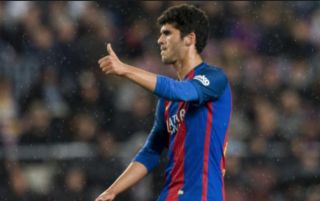 We all know that Barcelona are famous for their youth academy and the amount of youngsters they’ve brought into the first team, but those numbers have slowed down in recent years.

It’s hard to tell if modern football and the demands for instant success have had a negative impact on young players coming through, but the leap from the B team to the first team seems bigger than ever.

READ MORE: Chelsea ace reveals desire to return to Barcelona after missing out on Summer move

Carles Alena was a player who shone for the youth sides and looked like he could become the next Andres Iniesta, but he hasn’t quite done it for the first team yet.

That could explain why Real Betis have just confirmed they will take the young midfielder on loan in January:

It’s not all bad news for any Barca fans who have high hopes for the midfielder. The Mundo Deportivo report goes on to confirm that there isn’t a buyout option in the deal for Real Betis to turn the transfer permanent, with Barca still seeing him as having a long term future at the club.

They go on to say that it’s hoped he kicks on at Betis this season and shows he has the quality to perform at the highest level in La Liga.

Hopefully he does well and comes back to establish himself in the Barcelona first team next season.