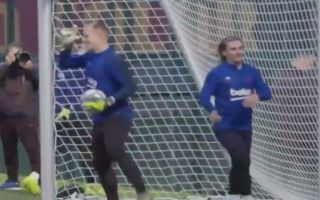 We see countless videos of teams in training that show a bit of banter and mocking between players, but it’s always brilliant when it looks like some kind of glitch in a video game.

This clip shows Marc-Andre ter Stegen making a decent save from Antoine Griezmann in training, but he then just breaks into the Frenchman’s own celebration out of nowhere in a mocking kind of way:

The video game effects are completed as Griezmann seems more preoccupied by showing his frustration from behind the line without even looking at his teammate.

At least it looks like the Frenchman is starting to fit in with his teammates, even if they are just mocking him.