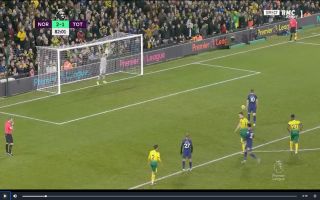 In the 81st minute of tonight’s Premier League clash between Norwich City and Tottenham, Spurs were awarded a penalty after Christoph Zimmermann clumsily brought down Harry Kane.

Jose Mourinho would’ve breathed a sigh of relief after the referee pointed to the spot, Spurs looked as though they were on the way to being on the wrong end of an upset before this moment.

Harry Kane stepped up confidently and sent Tim Krul the wrong way with a brilliant penalty.

Check out the England international’s cool, calm and composed spot-kick below:

The great @HKane draws the PK and then bangs it home ?? to equalize for @SpursOfficial. #COYS pic.twitter.com/0CgtM3KwkE

Kane is one of the best penalty takers in the world, Norwich will be kicking themselves after giving the talisman this opportunity.