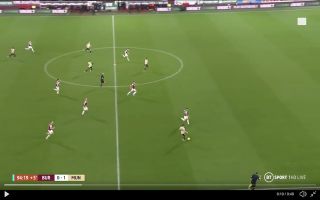 In the final minute of tonight’s Premier League clash between Burnley and Manchester United, the Red Devils burst forward on the counter-attack after defending a free-kick.

Lightning-fast winger Dan James charged down the right flank after picking up the ball before playing a lovely pass into Marcus Rashford.

The England international was through on goal and he decided to round goalkeeper Nick Pope, the forward momentarily lost the ball and slid the ball into the back of the net past Dwight McNeil.

Take a look at Rashford sealing the deal for United:

Marcus Rashford seals the three points on the counter-attack! ??

The Red Devils are now one point off fourth… pic.twitter.com/yZoW7JGHzi

Ole Gunnar Solskjaer’s side are one of the most frightening teams on the counter-attack in the entire league.