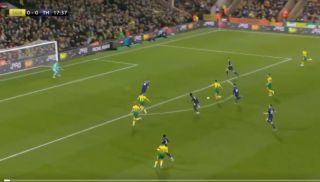 Norwich City have opened the scoring in today’s Premier League clash with Tottenham at Carrow Road.

Watch the goal video below from Mario Vrancic, who was given way too much room by Spurs as he raced forward and drove the ball home.

Wonderful bit of slyness by Teemu Pukki in the build-up to Norwich’s goal: pic.twitter.com/PruWLA8sX0

While it’s a good finish and there’s some smart play by Teemu Pukki in the build-up, as highlighted in the clip above, there’s no doubt Jose Mourinho would’ve expected more from Tottenham here.

Barely anyone challenges Vrancic or makes any attempt to close him down, which is criminal really as he advanced in such a dangerous area, and now Spurs have paid the price for this slack play.