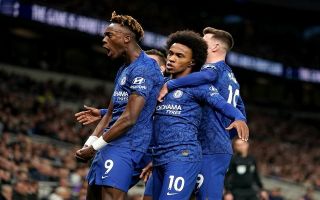 Some Chelsea fans will be delighted to see this old tweet of Tammy Abraham’s late winner against rivals Arsenal this afternoon.

Frank Lampard’s side pulled off a shock comeback victory with two goals against the Gunners in the last 10 minutes of today’s mammoth clash.

Abraham sealed a dramatic victory for the Blues in the 87th minute of the encounter with a fine finish.

A tweet of Abraham’s has now emerged that dates back to May 2012, the ace wrote ‘Arsenal defence is slackingg!!!’.

Who’d have thought that the boyhood Chelsea fan would’ve one day had the pleasure to put the sword to the Gunners’ so-called ‘slacking’ defence himself.

Take a look at the England’s international tweet below:

Abraham is currently the joint-third top scorer in the Premier League with 12 goals, the 22-year-old has a serious chance to get his hands on the Golden Boot if he can continue to pop up with crucial goals for the west London outfit.

Some Arsenal fans may have to take a little break from social media after this afternoon’s defeat.