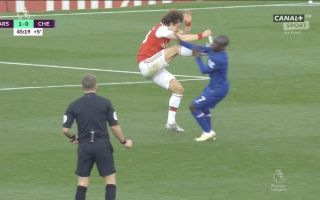 Luiz is often quite rash with his tackles, but this is something else.

David Luiz does this to Kante and Kante just stands there looking confused. If this was any other player they’d be crying for a foul on the floor or there’d be a brawl. The nicest man in football Kante is! #ARSCHE #chelsea pic.twitter.com/GfG4iT8Dbz

THIS HAPPENS RIGHT INFRONT OF THE REFEREE BUT DAVID FUCKIN LUIZ DOESN'T EVEN GET A YELLOW CARD BUT WHEN A CHELSEA PLAYER BREATHES NEAR AN ARSENAL PLAYER IT'S A YELLOW?WELL OKAY PREMIER LEAGUE. NOT TO MENTION IT'S THE SWEET NGOLO KANTE GETTING HURT pic.twitter.com/DPpPcsyn9G

Arsenal fans better not complain about the Jorginho pull on Guendouzi after David Luiz almost killed N’Golo Kante with a kick in the face. #ARSCFC #ARSCHE #ARSENAL pic.twitter.com/3PVcYwAnSs

We can’t believe that Luiz would attempt something this reckless towards his own former teammate. He was very lucky to escape a card for this challenge.