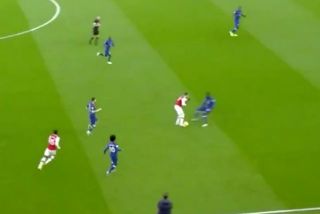 A late capitulation saw Arsenal come out empty-handed in their clash with Chelsea at the Emirates on Sunday afternoon.

The Gunners took the lead through Pierre-Emerick Aubameyang in the first half and dominated the opening 45 minutes to suggest that they were on course for a crucial win.

However, Chelsea had other ideas as late goals from Jorginho and Tammy Abraham turned things around and sealed all three points for the visitors, as they continue to try and keep ahead of the chasing pack.

There were certainly positives for Arsenal early on and with individual bits of play, including this magical touch from Mesut Ozil to get away from Fikayo Tomori.

As seen in the video below, the creative German ace left the Chelsea defender trailing with a deft touch before taking it past another player to keep the Arsenal move going.

Unfortunately from a Gunners perspective, it will mean little in the bigger picture as they suffered a damaging defeat, but these clips will certainly show that Ozil is capable of playing a big role for Mikel Arteta moving forward when he’s in top form and at his creative best.

Positives from today, Özil is back pic.twitter.com/HSnVivmhON