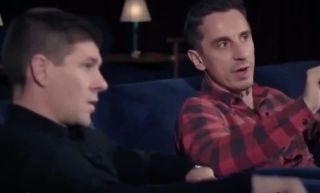 Such was Steven Gerrard’s quality and influence, former Man Utd boss Sir Alex Ferguson altered his tactics against Liverpool to try and shut him down.

That is what Gary Neville has revealed in a special feature for Sky Sports as he sat down with Gerrard to re-watch a classic encounter between the two Premier League giants.

As seen in the video below, Neville reveals how Ferguson used to make a point of trying to nullify Gerrard’s threat from midfield by matching him up with either Anderson or Darren Fletcher, and that even led to Paul Scholes being dropped to the bench on this occasion.

While it’s not directly inferred by Neville that Scholes was specifically dropped every time as perhaps there were concerns over a direct battle between the pair and who would come out on top, it does suggest that Ferguson was concerned by Gerrard’s quality, and it was enough to alter his tactics and possibly even his line up at times.

The Merseyside giants enjoyed some great results against United in that period, with Fernando Torres winning his own battles with Nemanja Vidic too.

However, they’ll hope that the current crop are more successful in terms of winning trophies, as they go in search of more major silverware this season after lifting the Champions League last year.