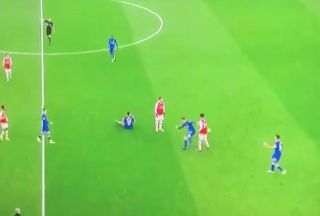 Arsenal put in a superb shift in the opening 45 minutes of their clash with Chelsea on Sunday, and they even had time to bring out the tricks.

Pierre-Emerick Aubameyang gave them the lead after 13 minutes after a blistering start to the game as they gave Chelsea no chance of settling.

That continued as the first half went on as Arsenal go in search of three crucial points to get themselves back into contention for a top-four finish in the Premier League this season.

However, despite the importance of the meeting, there was still time for Reiss Nelson to bring out his bag of tricks as seen in the video below.

Conveniently ignoring the fact that the whistle had actually been blown for a foul, the youngster produced a magical first touch to control the ball and then proceeded to nutmeg Jorginho as the Chelsea midfielder came rushing in to retrieve the ball.

This eagle-eyed viewer captured the moment in all its glory, although many will no doubt point to the fact that the whistle had already gone and it’s probably a little unfair on Jorginho to pick it out. Still, it’s a solid nutmeg…