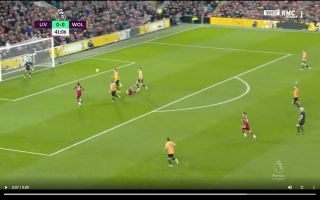 In the 41st minute of this evening’s Premier League clash between Liverpool and Wolves, superstar Virgil van Dijk launched a stunning pass into Adam Lallana from inside his own half.

The England international appeared to chest the ball into Sadio Mane’s path and the Senegalese star slotted the ball into the back of the net with a tidy finish.

The referee consulted VAR to determine whether or not Lallana played the ball into Mane with his hand.

Take a look at the Reds’ opener below:

DISALLOWED!
Sadio Mané has the ball in the back of the net but the referee has ruled it out for a handball in the build-up. ? #LIVWOL

The VAR review seemed to deem that the ball in fact struck Lallana’s shoulder and not his arm, was this decision correct?