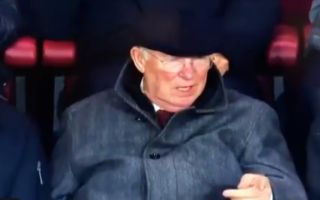 It’s hard to think of any other club in the world where one man is responsible for most of their success, but is also present in the stands for most matches to watch.

Of course Man United had a big history before Sir Alex Ferguson took over, but his time in charge saw an incredible amount of trophies and success at the club. He still attends most games, and it means the camera will always pan to him for a reaction to anything mildly controversial.

Ole Gunnar Solskjaer decided to replace Anthony Martial with Luke Shaw last night, and the reaction for Ferguson was one of bafflement and a bit of confusion:

Fergie’s reaction to taking Martial off for Shaw ??? pic.twitter.com/ore2K4t9IK

Thankfully for Solskjaer, Marcus Rashford went on to get a clincher to make it 2-0 and this sub didn’t backfire, but you can be sure that Fergie will question his former player if he gets a chance.