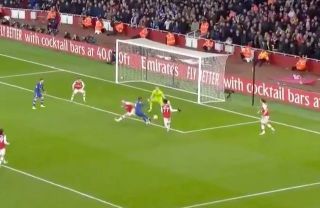 It was all Arsenal in the first half at the Emirates on Sunday, but Chelsea came roaring back late on to secure all three points against their rivals.

Pierre-Emerick Aubameyang gave the hosts the lead after 13 minutes as the Gunners dominated early on as Chelsea offered little to suggest that they could come away with anything to show for their efforts.

However, an individual error from goalkeeper Bernd Leno allowed Jorginho to tap into an empty net to draw Chelsea level, and just minutes later they were ahead.

After a rapid counter-attack caught the Arsenal defence out, Tammy Abraham kept his cool to slide the ball into the back of the net to complete the turnaround and seal the win for Frank Lampard’s side, as seen in the video below.

Given what was at stake with the two sides battling for a top-four finish in the Premier League this season, it’s a cruel and damaging blow as far as Arsenal are concerned as they have to continue to play catch up.

As for Chelsea, after stumbling in recent weeks with three defeats in their last five league games, this will be a huge boost for them to kick on and keep ahead of the chasing pack while they showed that they can find a way to win without playing at their best.

Slick counter-attack from @ChelseaFC, finished off in deadly fashion by Tammy Abraham!

Full highlights from the Blues' win over @Arsenal ?

WHAT AN ENDING TO THIS GAME TAMMY ABRAHAM pic.twitter.com/LlcOyjBWZS