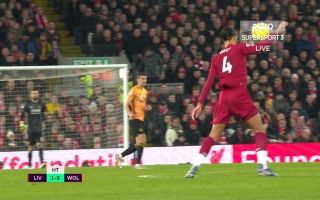 Just before Virgil van Dijk played a pinpoint pass into Adam Lallana that ultimately led to Sadio Mane’s opener for the Reds, the Dutchman looks like he may have handled the ball.

After a heavy touch the superstar defender appears to have controlled the ball slightly using his arm.

Check out Mane’s opener for the Reds here.

There seems to have been plenty of drama regarding the use of VAR during today’s clash, with some viewers left frustrated after the technology ruled out a first Premier League goal for Wolves’ Pedro Neto.

Anyone spot the Van Dijk handball in build up to Liverpool’s first goal? The ball clearly bounces up and hits his hand before he plays the ball over the top…VAR? #LIVWOL pic.twitter.com/HZQSEc99yz

Look at this. Van Dijk made a handball where the 1-0 came from. Why didnt the VAR saw that ?? pic.twitter.com/Q5pXdUrji9

It’s clear that the use of VAR needs to be improved dramatically, if it’s found that Van Dijk did actually handle the ball in this incident – Wolves will have been robbed by officials.