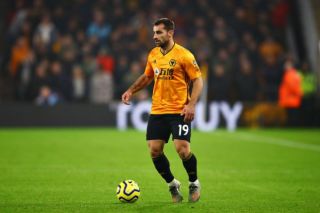 Liverpool have reportedly launched a probe into an alleged incident involving Wolves ace Jonny and a ball boy at Anfield on Sunday.

The Merseyside giants secured a 1-0 win at the weekend to stay 13 points clear at the top of the Premier League table.

SEE MORE: ‘The game is ruined’ and ‘football is finished’ – These viewers FUME after VAR decision disallows Wolves goal vs Liverpool

However, the game didn’t pass without controversy as Wolves were left furious just before half-time due to back-to-back VAR decisions going against them.

Initially, a VAR check for handball in the build-up to Liverpool’s goal resulted in Sadio Mane’s opener standing, and replays did suggest that Adam Lallana’s shoulder made contact with the ball rather than his arm.

In contrast, there was outrage on social media after Pedro Neto saw his goal ruled out after a marginal offside call, and so perhaps tempers and emotions were running high at the break.

According to Sky Sports, Liverpool have now opened up an investigation after it was claimed that Jonny ‘came into contact’ with a ball boy while trying to retrieve the ball after it had gone out of play.

“The club is aware of the incident and will follow established protocols in terms of gathering the relevant information,” Liverpool said in a statement. “While that process takes place we will be making no further comment.”

It sounds as though Jonny may well have been over-zealous in trying to get the ball back quickly from the ball boy to avoid the momentum of the game being disrupted.

However, clearly he must act in a professional way in doing so, and while the investigation will deliver a clear outcome to the matter, it sounds as though the basis of it being launched in the first place is that perhaps the Wolves ace may have overstepped the line.