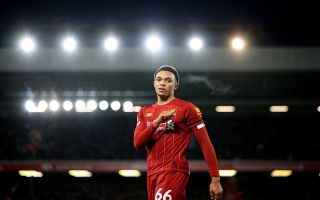 Liverpool star Trent Alexander-Arnold appears to have taken a dig at La Liga giants Barcelona with a tweet to commemorate the end of the decade.

The right-back’s post included an image of himself in the Liverpool youth team next to a snap of his iconic moment for the Reds in last season’s Champions League semi-final.

Beginning of End of
the decade. the decade. pic.twitter.com/alsBVWxFxX

Alexander-Arnold has gone from strength to strength in the last two years, the 21-year-old has established himself as one of the best full-backs in the world by becoming a crucial part of Liverpool’s frightening attacking play.

The England international’s passing and crossing ability is perhaps the best the country’s seen since Manchester United legend David Beckham used to ‘bend them like Becks’.

Given the youngster’s impressive performances as of late, we wouldn’t be surprised to see Alexander-Arnold picked as the best full-back once the the upcoming new decade comes to an end.